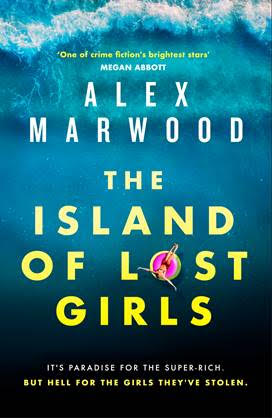 The Island of Lost Girls is a jaw dropping read from Alex Marwood. It slithers under your skin and catapults you into a world of riches beyond your imagination and the seedy life and death games abuse that occurs when horrible lust fuelled perverts have far too much money, and power.

You may read the book as fiction however like many of Alex Marwood’s novels the premise has been ripped from the headlines of scandal, it may make your skin crawl and your brain itch, but events akin to these have really happened in the real world. If you still deny the truth, do take a peek at Netflix and Filthy Rich, a Jeffrey Epstein tale. Spoiler alert – he didn’t kill himself.

Alex’s book is made all the more poignant by the points of view of the protagonists. From the inhabitant of the beautiful island who makes a meagre living from cleaning for the filthy rich perverts to the distraught mother of a teenage missing girl who was last seen on this slice of paradise in the azure ocean away from prying eyes. Occasionally we glimpse the terrors of the victims which makes for uncomfortable but necessary reading, yet Alex never throws us too far down the depraved well, just dangles us enough so we can experience a modicum of the fear of the lost girls. As readers, our toes touch the floating scum of murky water but never fully submerge.

The Best Crime Writer of the 21st Century

It astounds me that Alex Marwood isn’t better known as a crime writer, a horror writer, a writer that puts a placeholder in the 21st century to let anyone following know that we, living in this age, knew such wondrous creativity, such genius of the written word. Of course her books sell out across the world, but they all leave such a lasting impression that they’re impossible to shake off after days, weeks and even years. They crawl into your brain and rearrange your beliefs while making you a part of an entirely alien world that still feels very real. That’s the kicker.

Get Ready to Relate

You may think your life is so very removed from the Lost Girls, from the Wicked Girls, from the Killer Next Door and the Poisoned Garden but Alex Marwood is here to dissolve those seven degrees of separation and to place you uncomfortably side by side with the victims and the perpetrators, not just inside their complex minds but living their lives for the duration of the novel and beyond. Alex has such a grasp on psychology that she finds the relatable thread and pulls it tight, keeping you hooked and close until the very end.

In addition to this Alex victoriously understands every single class and social status as if she’s cycled through every one personally. From the homeless to working class to middle class to the richest 1% Alex writes with such compassion, authority and insider knowledge that anyone can relate. It’s impossible not to feel as if Alex is talking to you directly, as if she’s been a fly on the wall during your Sunday gatherings and seen how your family operates.

Alex has the widest vocabulary of any author I know, yet anyone, of any reading ability will be drawn into her novels and will read every page with ease. She never patronises the reader, she takes you along with her as she tells salubrious, deprived tales that twist and turn from beginning to shocking end.

The Island of Lost Girls starts with a shocking event that lays clues to happenings at the end. In the middle you’ll experience grief, loss, injustice, hate, disgust, pity and nauseous horror until it leaves you a quiet relief.

If you’ve ever wondered how the other half live, if you’ve ever fancied the summer on a super yacht, if you’ve ever lived or breathed, this s the book for you. Right now it’s 99p on kindle, please, go get it, read it, then let us know what you think on Twitter or in the comments. We promise you will not be disappointed but you may be shook up, just a little.

We also adored The Darkest Secret which explores another side, in fiction, to the McCann case.

Martina Mercer - November 22, 2022
Are you stuck on what to buy him this year, for his birthday or Christmas? We've got you covered with some great ideas that will put a smile on his face. A...
Read more

Martina Mercer - November 21, 2022
It can be so hard to buy for people who have everything so we've put together a gift guide of luxury gift ideas to help you to decide. These gift ideas are...
Read more

Martina Mercer - November 21, 2022
We're bringing you the very best tech gifts and toys so you can discover the latest technology and toys to gift to the geek or gamer in your life. We've tested every...
Read more

ABOUT US
Sunday Woman is the fastest growing luxury lifestyle magazine for women over 30 in the world. Starting in the UK and now popular in the USA, Sunday Woman delves deep into areas that others fear to tread. Alongside the gift guides, reviews, tips and advice, you'll find exclusive news and content for the intelligent, ambitious woman. Subscribe to our newsletter to be the first to hear about giveaways and competitions, and join us, not just on a Sunday, but everyday, as we want you to be part of the Sunday Woman village. It's a great place to be!
Contact us: editor@sundaywoman.com
FOLLOW US
© Copyright Sunday Woman Magazine 2014-2020.
MORE STORIES
Books

A Chat About Motherhood with Katie Piper

Martina Mercer - February 27, 2018
Martina caught up with Katie Piper to ask her some advice on motherhood, anxiety and overcoming fear. Katie sparkled as she shared insights into...
Books

The Hunt for a New Children’s Author is On!

Martina Mercer - August 14, 2017
We welcomed Sarah Denzil to the Sunday Woman sofa and asked her our ten probing questions. No one escapes the prying minds of the...
Books

Is 50 Shades of Grey Changing Relationships?

Martina Mercer - February 24, 2018
I became an avid reader at a very early age, as my parents and grandparents swore by books to stretch the imagination and to...