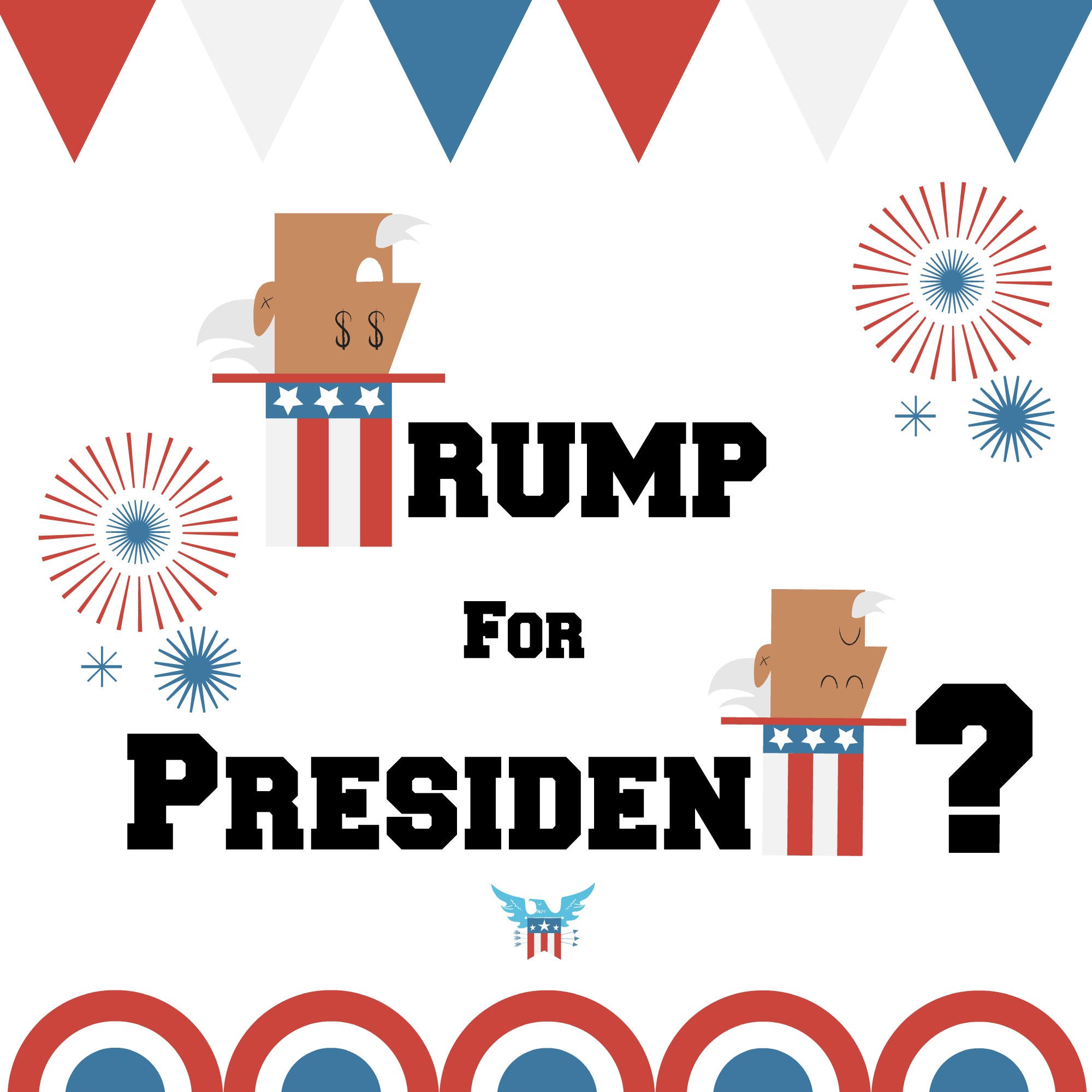 I’ve little against Donald Trump, until today I didn’t know much about his policies or his real personality (in fact, I’m not sure I’ve actually learned much more today). I do have something against his supporters though, as my last article will show, along with my article, “Death Threats I Received When I Questioned Donald Trump’s Policies”.

In the UK, I voted for Brexit and the reasons I did have absolutely nothing to do with immigration. I explained my reasons clearly at the time, but some Trump supporters compare the Brexit to voting for Trump. They see small similarities and wonder why I’m not in favour of a Trump presidency, after all, I must be a racist bigot if I voted to leave the EU? It’s this swallowing of the media bias that annoys me, just as Trump supporters swallow the lies, many also lap up the untruths surrounding politics as they’re too lazy to dig deeper. As soon as a middle class newspaper speaks out against a decision, the readers will also follow suit, lest they are seen as inferior and common for having a different opinion.

This is why I wanted to like Trump, through all the negativity, I’d picked out some positives and I was looking forward to watching the debate with a completely open mind, I was ready to be swayed. As Trump supporters will tell me, it’s not my place to have an opinion, it’s not my country and I don’t get to vote. Maybe so, but I am allowed to have a healthy interest in world politics especially when history is being made.

I watched the whole debate live and didn’t read any news afterwards, just so I could deliver a totally unbiased opinion. This is what Donald Trump taught us or me in particular.

I found it amazing that this year I could watch the whole debate without a dictionary. Usually there are technical terms or obscure amendments that are referred to which leave me clueless until I do my research. This year, everything was plain and simple. A little too plain and simple perhaps. Donald rarely expanded on his limited vocabulary and often had trouble finding the right word or phrase for a situation. For instance, “police and their um relations, police relations with people are not good relations” or words to that effect. He also repeated Hillary when she used a word that sounded intelligent he would use it in proceeding sentences. His favourite being cavalier at about 53mins in.

The debate lasted 90 minutes and despite commanding the attention for the majority of the time, he really didn’t say a lot. He repeated himself, he threw insults but he didn’t reveal anything of substance at all. In fact, he wouldn’t have been missed if he’d been replaced by a broken record.

Trump has lost touch with who his voters are (see below). He thinks they’re all his kinfolk, he thinks they enjoy life as he does. The fact is, the majority of Trump supporters are actually uneducated, unemployed and undesirable (not all, just most). He probably put a few of these off today when he spoke of big tax cuts for big corporations. He mentioned nothing of what he’d do for the average Joe and that was a huge mistake, one his brand manager, campaign manager or voter psychologist should have warned him of.

He uses his claims and words as momentum to carry him through on a cloud of lies to the finish line.

I’m quite convinced that if we viewed an academic exam, taken by Donald Trump, we’d find messy, rushed handwriting and careless answers. He uses his claims and words as momentum to carry him through on a cloud of lies to the finish line. In short, he doesn’t care how he gets to the end, as long as he finishes. He worries about the consequences later. He will have a lot to clean up after this debate and a lot of clarifications to make but, at the time of the debate, it was quite obvious he didn’t care a jot, as long as he ended it. He’s very much an “it’s easier to ask forgiveness than permission” guy and that’s quite scary. Hillary meanwhile, trotted regally through and seemed to enjoy the challenges thrown at her, and it’s this attitude of dealing with the problem properly, at the time, and not sweeping difficult questions under the carpet which will allow her to relax a little now.

I’ve had a few boyfriends like Trump and I’m sure there’s no need to spell it out. He’s a victim, it’s always someone else’s fault, he sees an apology as a failure. In short, he’s immature.

When he was faced with a tough question he rummaged for an accusation to throw at Hillary instead of clarifying and answer for his adoring public. In the full debate, he didn’t add reason to any shocking statement he’d made, he simply compounded the confusion we all feel at having him run for the presidency.

It was incredulous when he said that not paying taxes made him smart. He has lawyers who help him avoid taxes, 95% of his voters don’t. Will they trust him with their tax if he can make bills disappear? He also boasted of exploiting laws for his company’s benefit, laws which meant small businesses endured bankruptcy due to his failure to pay. This is not something he should have said in a presidential debate, hell, he should worry about uttering these admissions in public at all.

In marketing, branding, and copywriting, it’s dangerous to assume that all customers are like you, that they hold the same beliefs and like the same things. Sometimes, you may have to market to a demographic that you know nothing about, but you have to learn fast and you have to crawl under the skin of the target market in order to sell a brand. This is a lesson that’s been missed by Trump, he doesn’t consider others, he believes all people are white multi-millionaire business men with rich daddies who are seeking tax cuts and that will be his downfall.

In summary: Trump didn’t snort, he didn’t sniff and he didn’t have a broken microphone, he simply came across as arrogant and misinformed. He certainly won’t be the next president. Hillary meanwhile is receiving advice that made her stand out as a strong, empathetic, considerate candidate who has learned from mistakes and is ready to put her experience into action. I was indifferent about Hillary before this debate, now I see her as an idol and I’m championing her every step of the way. Even if I don’t get to vote, I still get to share my opinion with the world!

PayDay Loan Traps and Universal Credit – Why Are So Many Relying on Foodbanks?

The Seven Horcruxes of Donald Trump and How to Defeat Them : A Definitive Guide

Martina Mercer - March 31, 2022
Body scrubs are an excellent way to exfoliate and to remove dead skin cells, while leaving you feeling fragrant and refreshed, however I've found lately that some actually dry the skin, zapping...
Read more

This week I had the pleasure of meeting Leila, the founder of Bake2Explore. This sunny, optimistic, beautiful and vibrant woman bounced into my life and introduced me to all the fabulous features...
Read more

Martina Mercer - January 28, 2022
Ricky Gervais answered my questions when I wrote a review of Derek so I’ve been eager to share my own thoughts on the Netflix series Afterlife. I’ll be careful...
Read more

Martina Mercer - January 27, 2022
As a single mother of three unique children, aged ten, seventeen and twenty-one, I watch YouTube daily. There are channels that I watch alone and channels I watch with either one of the...
Read more

Martina Mercer - December 17, 2021
Little beats the feeling of climbing into a warm, soft bed and so we've been looking for the very best bedding. We think we've found some winners, 100% cotton, luxurious winter bedding that feels...
Read more

ABOUT US
Sunday Woman is the fastest growing luxury lifestyle magazine for women over 30 in the world. Starting in the UK and now popular in the USA, Sunday Woman delves deep into areas that others fear to tread. Alongside the gift guides, reviews, tips and advice, you'll find exclusive news and content for the intelligent, ambitious woman. Subscribe to our newsletter to be the first to hear about giveaways and competitions, and join us, not just on a Sunday, but everyday, as we want you to be part of the Sunday Woman village. It's a great place to be!
Contact us: editor@sundaywoman.com
FOLLOW US
© Copyright Sunday Woman Magazine 2014-2020.
MORE STORIES
more

Suicide Prevention Is a Tough Subject for Those of Us Left...

Martina Mercer - September 10, 2015
"How could I have prevented it?" To those of you with depression and other mental illness, it seemed enough that I understood or at least...
Business

Martina Mercer - December 6, 2018
I’ve been looking forward to this for weeks as one of my clients is the incredible bean to bar single estate chocolate Willie’s Cacao....
more

Rose Gold Products that Shine Brighter than Others

Martina Mercer - May 9, 2017
We've fallen in love with rose gold products, from hairbrushes to highlighters and everything in between. Here we bring you the best rose gold...